The soldiers that had spent some time at a particular location made it their duty to pass on the stories, legends, and folklore of the facility, the post, or base where they happened to be stationed.  Most of the stories did have at least a little bit of truth to them but all of them were embellished to make the incoming troops feel uneasy for the entertainment pleasure of the short-timers (a term for the guys nearing the end of their tour assignment or their discharge from the service).

In Thailand one of those stories was about a snake named the Banded Krait, a short but highly poisonous viper.  To illustrate its so-called high toxicity it was called the “Two Stepper”, meaning after you were bitten you might take two steps and then keel over dead.  Actually, they are less venomous and shier then some snakes, such as the cobra, their reputation was bolstered on purpose to satisfy the stories passed on from troop to troop.

There were sandbag bunkers at various areas all around the perimeter of the compound that were to be used if and when attacked by the so called Thai Cong.  They remained mostly unused and just needed a little cleaning out from time to time due to the torrential rains during the monsoon season.  Each squad had their own set of bunkers assigned to them.  During one cleaning out session I spotted the “Two Stepper” and that bunker didn’t get a cleaning that day.

Well as you might guess the very next night we got roused out of our bunks about 2:00 in the morning due to a suspected raid by the Thai Cong.  Everybody had to report to the quartermaster to get a rifle and helmet and report to the bunkers.  All unnecessary lights were off as a defensive measure.

Well, Specialist Harrison was born at night but not that night so he also grabbed a flashlight out of his footlocker.  With my helmet on and rifle in hand, I got to the bunker shining my flashlight at anything and everything until the squad leader snatched the flashlight out of my hands.  The career sergeant was screaming at me and whispering at the same time that the ‘enemy’ might pick me off with one shot by just aiming at the light.   I told him that the ‘enemy’ might,  maybe, or could be out there but I saw a “Two Stepper” in there just the day before and I’d take my chances on the outside of the bunker.  After saying something about my mother and something about stupid comm guys he left me to my devices.

It did turn out to be a false alarm that night but my commanding officer told me the next day that if I pulled a stunt like that again Specialist 4th Class (E4) Harrison would be Private First Class (E3) Harrison.  I never had to call his bluff since that was the last time I had to visit the bunker at night time.  Oh, by the time I left Thailand I was Specialist 5th Class (E5) Harrison, so take that Captain Napier! 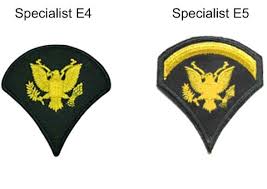